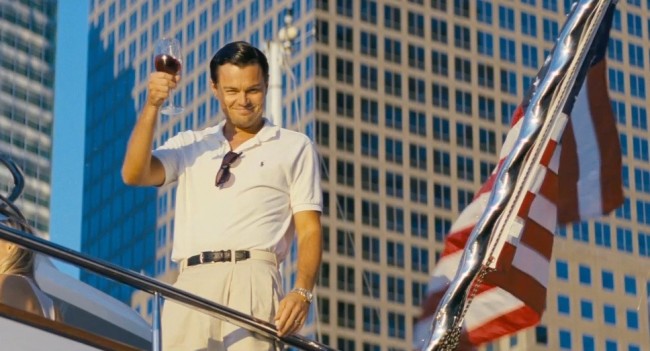 Who’d have guessed that at 71, Martin Scorsese would be making more vivacious films than most directors half his age? The Wolf of Wall Street is one of his best, a simmering 180-minute bacchanal of depravity that will be hard to best for exuberance and audacity for years to come. Scorsese doesn’t moralistically vilify real-life stock swindler Jordan Belfort, but his reduction of the man to a colossal onscreen clown is sweeter vindication still.

Convicted in 1998 for fraud and money laundering, Belfort (Leonardo DiCaprio) built his empire atop a foundation laid in the late ‘80s, shilling penny stocks at a two bit Long Island brokerage. Scorsese chronicles his meteoric rise to Wall Street deity and his subsequent downward spiral into drug addiction and persecution by FBI agent Gregory Coleman (renamed Patrick Denham and played by Kyle Chandler) with an urgency he hasn’t exhibited in years.

Rather than indulge in the minutia of the investigation, Scorsese indulges in Belfort’s excess: the sex, the drugs — set to his own eclectic rock & roll mixtape. But for all the glitz and gloss, he never attempts to absolve Belfort of his crimes. There’s a certain degree of flamboyant fetishism to his depiction of the protagonist’s highest highs, but Scorsese shows no pity during his lowest lows. Instead, he exploits Belfort’s foibles for uproarious karmic comedy.

The Wolf of Wall Street has all the makings of a dark comic masterpiece. Penned by Terence Winter (The Sopranos, Boardwalk Empire), the script is stocked with deeply flawed characters doing detestable things. However, the absurd depths to which Belfort and his cronies crawl are truly, deplorably funny. Like Paul Thomas Anderson’s Boogie Nights (itself a pastiche of Scorsese-isms), The Wolf of Wall Street laughs at the corrosive power of wealth and success. Let there be no confusion, while Belfort’s extravagance can be awe-inspiring, his morality is unquestionably bonked.

DiCaprio relishes the role, sharply contrasting his stately take on another wealthy so-and-so, Gatsby, earlier this year. Belfort is not so Great, but Leo is great as him. In perhaps the film’s standout scene (and there are a few to choose from), an incapacitated Belfort is blitzed on expired quaaludes and must drag himself down a flight of stairs to his Lamborghini. Later, he arrives home to find his partner, Donnie Azoff (an equally impressive Jonah Hill), asphyxiating on a slice of deli meat. The entire bizarre sequence feels almost Lynchian in its relentlessly unsettling hilarity.  Bravo, Marty.

The Wolf of Wall Street is an unexpected triumph: a master class in filmmaking made all the more surprising by Scorsese’s age. Teeming with nudity, narcotics, and more “Fucks” than any narrative feature film ever (544), this is not the product of an old man. Rather, it’s the product of a director who, like Jordan Belfort, refuses to go quietly.

Where many of his contemporaries plateaued or imploded, Martin Scorsese still mines untapped passion from somewhere deep. He’s a director that has long since proved himself — and yet, the number of swooping cranes, dramatic dollies, and myriad other instances of playful experimentation in The Wolf of Wall Street is simply staggering. It stands tall among the best films of 2013, and among the greatest dark comedies of all time. It is defiant, rebellious, rude, and indecent. In another word, young.