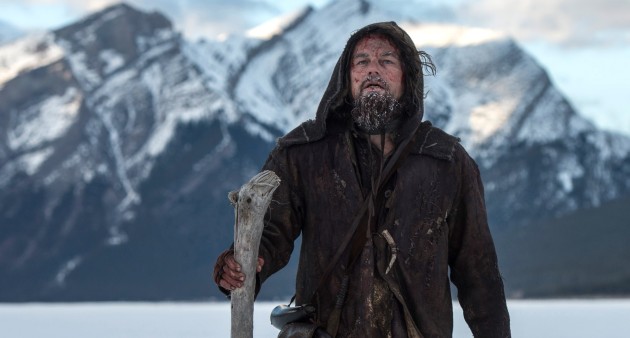 What a year for westerns! From Fury Road’s post-apocalyptic riff on Stagecoach to Tarantino’s close-quarters talk-‘em-up The Hateful Eight and the wide-eyed austerity of Slow West, the genre has had its best year in… maybe ever. And that conversation gets a whole lot more interesting with the arrival of The Revenant, Alejandro Gonzáles Iñárritu’s ambitious follow-up to 2015 Best Picture winner Birdman.

Based on Michael Punke’s 2002 book bearing the subtitle “A Novel of Revenge,” The Revenant casts Leonardo DiCaprio as frontiersman and father Hugh Glass, whose brutal encounter with a grizzly leaves him bloodied, broken, and—worst of all—in the care of nefarious fur trader John Fitzgerald (Tom Hardy). Fitzgerald shirks his promise of a proper burial, leaving Glass with a parting mouthful of dirt in a shallow grave, alive and alone in the American wilderness.

Glass’ protracted recovery and dogged quest for vengeance unfurls with grace and menace—like smoke from a billowing campfire—into one of the most breathtaking survival stories of all time. Credit is owed in no small part to the cinematography of Emmanuel Lubezki, whose résumé reads like a top ten list: Children of Men. Tree of Life. Birdman. Gravity. I could go on.

Yet his work on The Revenant taps into something deeper. Something primal. The landscapes he captures suggest the impossible majesty of our imagination or ancestral memory, from mossy primeval forests to immaculate snowcapped mountains to the ghostly pall of the moon in various phases of eclipse. These images, bolstered by a general dearth of dialogue, form a unique cinematic vernacular. If you’ve followed The Revenant through its troubled production at all over the past year, you’ll know that that achievement comes at a price.

“A living hell.” That’s how one crewmember described the shoot in an interview with Variety. According to Hardy, the film became colloquially known as “The Forevenant” among cast and crew over a grueling nine months on set. What accounts for that staggering schedule is Iñárritu’s insistence on shooting the film sequentially, using (almost) entirely natural light. With only a brief window in which to film, each day became a struggle against dusk, weather, and morale.

Perhaps then there’s a touch of legitimate fatigue that bleeds through into each exhausted performance. DiCaprio imbues Glass with almost supernatural drive, pressing ever onward on two shaky feet, caked in mud and blood, or slithering through grime, diving headfirst into raging rivers, and fighting—often literally—for survival in relentless pursuit of Hardy’s callous, sharky Fitzgerald. This is mostly Leo’s show, however, and he brings a harrowing, obsessive determination to the role—which many speculate may finally land him an overdue Oscar.

A moral chasm separates these two principal characters, but both teeter dangerously on the precipice of savage violence in each do-or-die moment they’re lucky enough to live. The dangerous world of The Revenant threatens at every turn to explode into a torrent of bloodshed, and the action set-pieces command attention through the sheer three-dimensionality of their carnage. Lubezki’s camera roves past plumes of smoke from discharged rifles as arrows puncture skulls and bullets flatten men.

The sum of these skirmishes is a battle-charred epic anchored by a simple, emotionally resonant story executed by consummate master craftsmen. The Revenant is alive with kinetic energy, yet shows expert command of pace and tone over the entirety of its 156-minute runtime. We’re left feeling as haggard and as hollow as the protagonist by the film’s final act, and the questions it leaves us with linger alongside a cumulative awe. This is Hollywood spectacle of the highest caliber, a breed of big-budget, down-and-dirty entertainment that doesn’t pander to its audience, doesn’t lean on cliché, and doesn’t take prisoners.

From the perspective of a beleaguered film crew, Iñárritu’s methodology may be questionable—but as a viewer, it’s hard to argue with his results. Depending on how you log it, The Revenant is either the best movie of a young 2016 or the best western of the year in a year of exceptional westerns. Its fearsome intensity is matched only by its creative fearlessness, and the evidence of its power is audible in the chorus of gasps that ring out from its rapt audience.