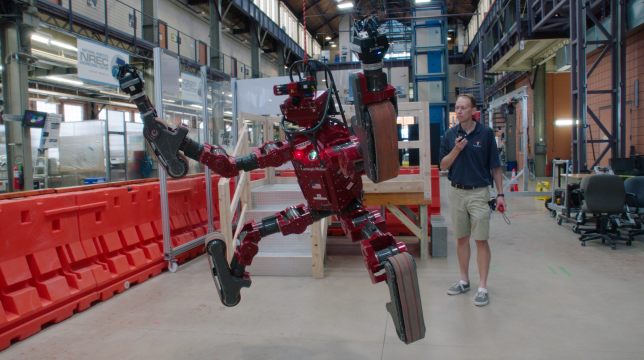 Stationed somewhere along a weathered strip of highway between signposts reading Philosopher and Provocateur, Werner Herzog crafts his specific breed of poetic documentary films. His latest, Lo and Behold: Reveries of the Connected World, is a contemplative exploration of emerging and bourgeoning technologies, from the humble origins of the internet to an ambitious plan to land a man on Mars.

It’s a topic that begs for scrutiny under Herzog’s existentialist eye, and the 73-year-old filmmaker digs in with earnest (if often perpendicular) curiosity. Each of the ten constituent chapters addresses a separate sphere of innovation, the purported subject always secondary to the implications foreseen by the introspective, extroverted auteur. For Herzog, the question isn’t “How does it work?” when interviewing the programmer of a team of autonomous soccer-playing robots, but rather “Do you love it?” in reference to the squad’s star player, Robot Eight.

Lo leads off with a tour of UCLA, where Herzog is quick to brandish his trademark deadpan wit. “The corridors look repulsive, but this one leads to a shrine,” he intones via voiceover narration. The camera follows a chipper gentleman into a sickly green room preserved exactly as it was in 1969, when the very first message was sent between computers in Los Angeles and San Francisco. That historic message comprised only three characters (“log”) and caused one of the machines to crash, leading to a prophetic typo—“lo.”

Other standout sequences include a visit to an isolated rehab center for adolescent internet addicts, a retreat for victims of wireless radiation sickness, and the home a grief-stricken family whose matriarch attributes the online abuse she endured following her daughter’s fatal car crash to the devil himself. “It is the spirit of evil,” she somberly suggests of the web. “It’s running through everybody on earth and it’s claiming its victories in those people that are also evil.”

Herzog approaches each of these characters with the particular cocktail of irony and empathy their situation demands. In a scene with the aforementioned family that recalls Grizzly Man, he refuses to show even a portrait of the victim lest it be misread as exploitation. Instead, he photographs the piano room, and other “places in the house that she liked.” He respects catastrophe almost as much as he does audacity, which makes him a perfect match for SpaceX CEO Elon Musk—for whom he readily volunteers to make the long journey to Mars, even if it means punching a one-way ticket.

The sum of these scenes is a mosaic of human triumph, tragedy, and eccentricity borne of our unassailable desire to create. The explosion of internet technology over the past two decades and its occasionally frightening potential for the future proves fertile ground for a filmmaker with Herzog’s singular perspective, though Lo and Behold declines to make any sweeping statement. Rather, each vignette plays like its own Herzog doc in miniature, treating the science as exposition so he can explore questions like, “Does the internet dream of itself?”

The answers are as varied as they are fascinating and the film, though minor in an oeuvre as accomplished as Herzog’s, is compelling and worthy in its own right. So what’s next for a restless storyteller that’s already tackled death row, the ends of the earth, and the internet in the 21st century alone? Next up is Into the Inferno, an investigation of active volcanoes—and only Herzog knows where the wild road will take him after that.